A Compact Hiking Camera with GPS 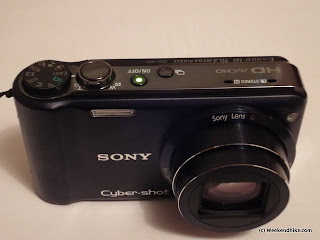 My cameras in the past have always seemed to lack some function here or there that makes them less than perfect. But the new Sony DSC-HX5V

is as close to perfect as you can get for taking photos while hiking.

The main feature is a built-in GPS that codes each photo with location coordinates. No adapter, connecting to a GPS or manually adding GPS info -- its all automatic and in the camera. It even works flawlessly with iphoto 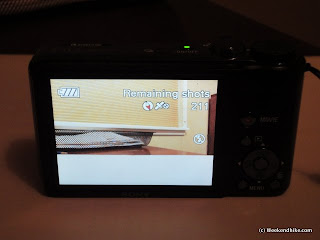 GPS (yes really!) - Oddly this isnt really mentioned much in reviews, but this camera has a BUILT IN GPS. Your photos are geo-tagged automatically so they are super easy to add to maps. The GPS info works with iphoto

-- no need to use any Sony Software or converter to get at the GPS coordinates. Just plug the camera into your Mac and it downloads the photos and GPS data automatically.

SD Card - This Sony is one of the first to offer the ability to use regular or HC SD Cards in the camera. You are no longer required to use Sony's MemorySticks (unless you want to).


Flash Off Default - One issue about Canon cameras I had in the past, was that you couldnt turn off the auto flash by default. Each time you powered up the camera you had to turn off the Auto Flash. This was annoying for me on Day Hikes as their is usually plenty of light, but the canon's flash wanted to brighten things up anwyay. The Sony has a default setting where you can turn the autoflash off. The setting stays that way even when you power on/off the camera.

Sunny Shots - Shooting into the sun is never a good idea, but on some hikes you can't always get a shady view. This Sony seems to handle the full sun shots better, with less "rays" or spots showing up on the photos -- its not perfect on this issue but at least much better than Sony DSC-WX1/B

Size and Heft - The Camera is compact, but big enough to feel sturdy and secure. My previous Sony DSC-WX1 is almost too small for hiking and has "too easy to touch" power button.

Only a couple cons with this camera -- the camera requires a Sony propriety cable (due to the Video connectors), having a basic USB cable would be better. The battery life is not as long as in the Sony DSC-WX1/B

and Canon S800IS -- probably due to the GPS functions. But I would gladly take GPS data over slightly shorter battery life.

at Best Buy -- but only after having the Best Buy employee look in every nook and cranny to find it. Apparently these cameras are VERY popular and the one we found was stashed away for some reason -- maybe saved for a employee. Currently it shows as the #2 Sony Camera