This about 2 miles from the entrance of Snow Canyon State Park (originally named Dixie State Park) outside of St. George Utah. Upon entering the park, you do have to pay a fee of $6 per car. 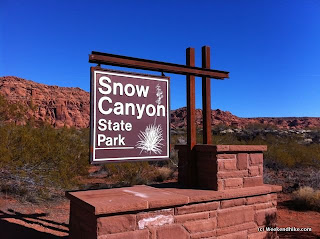 Depending on the season be sure to bring extra water for this hike. We did it in the afternoon and again at Sunrise. Both times are great times to do this hike - watching the sunrise over the Canyon walls was fantastic and make for better photos with the morning light.

If you are looking for a free/walkable hike from the Red Mountain Resort I would suggest doing the Johnson Canyon trail hike (which is prior to the Pay Booth for the park -- its also easily accessed from the Inspiration trail from the Resort.

For this hike to the Hidden Pinyon Overlook, you need to drive your car to the trailhead. For a general map of the Park, click here.

The parking lot/trailhead serves a number of trails including the Three Ponds, Whiptail (paved) and Hidden Pinyon trail. 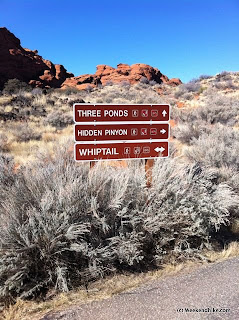 From the Parking Lot, head due north/uphill on the paved trail and be on the lookout for the Hidden Pinyon dirt trail on the left side. You can take the Three Ponds trail as well as it all ends up at the same point.

After walking on the sandy sections the Hidden Pinyon trail quickly enters an area of small canyons surrounding several large sandstone formations. At two points you do need to scale/scramble on sandstone - its nothing difficult. 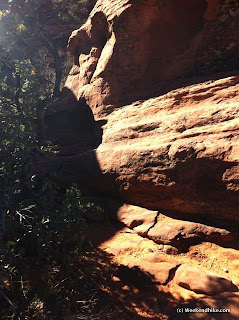 After passing through the canyons, you will meet up with the (unmarked) Three Ponds trail, just keep to the right.

Soon the landscape will open up with some great vistas of the Park. The trail will continue on a mix of sandstone/dirt. 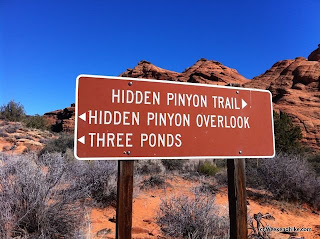 Continue on the trail looking for the large intersection sign. Some folks probably call it a day and return on the Hidden Pinyon trail, but be sure to continue toward the Hidden Pinyons Overlook.

The Three Ponds trail continues over the edge at one point, but stay left continuing toward a large rock plateau. 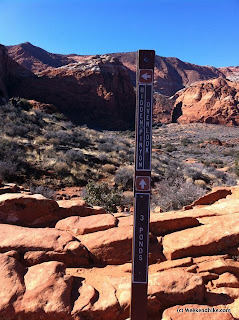 Be sure to scale the final/highest plateau to get the best view (its well worth it). Look for an easier access point around the plate on the left side. 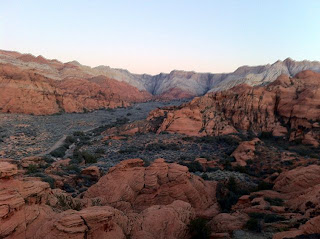 Take in the gorgeous views - my photos really dont do it justice.

On the return, you can re-trace your steps or take the quicker Hidden Pinyon route (turn left at the Large sign intersection).

We found returning via the Hidden Pinyon route was a nice change form the canyon route.

The Hidden Pinyon trail intersects with the Whiptail paved trail at one point, feel free to just take the Paved trail back to the Parking Lot.


Basics:
Area - Snow Canyon State Park (near St. George Utah)
Trails - Hidden Pinyon, Three Ponds, Whiptail (see map)
Length - 1.5 miles roundtrip
Duration: 60 mins ~ 90 hours (round-trip)
Trail - Mix of Sand, Dirt, Sandstone trail surface
Bikes - No bikes allowed
View - Great views
Getting There - Snow Canyon Road from Ivins or Highway 18 from St George. Look for the parking lot near the Three Ponds trailhead.
Fee- $6 per car
Weather - Some shade in the small canyons, otherwise in the open under the sun
Other Info - You will need a car to reach this trailhead within the park.